Please share away and/or send a message of concern to the mentioned school board members.  Thanks 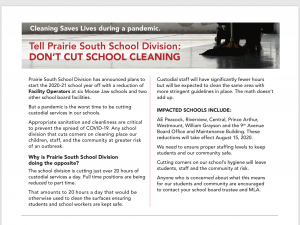 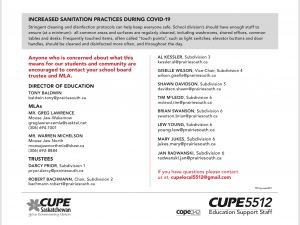 When sending the union a copy of your application/bid for job postings, please do the following:

If you have any questions, please do not hesitate to contact Dale Smith or Dianne Rasmussen.

This Scholarship is open to:

Students must be enrolled in their choice of education for the first available semester in the year following graduation.

Forms can be obtained from the Principal or Guidance Counsellor at your son/daughter’s school.

Please contact Dianne Rasmussen @ rasmussen.dianne@prairiesouth.ca if you know of a member “in need” of receiving a card and/or gift from the union.

Members of CUPE Local 5512 have voted 95.7 per cent in favour of moving forward with job action, up to and including a full withdrawal of services.

“The employer is coming after a long-standing retirement benefit, pushing a wage freeze in the first two years of the agreement, and trying to divide us by offering deals that hurt some of us more than others,” said Dave Stevenson, CUPE national representative. “The message we heard from our membership was loud and clear. We are standing united against these concessions and miniscule wage offers. We deserve and demand more respect than the employer has been showing us.”

The Prairie South School Division is trying to eliminate the members’ Long Service Recognition Benefit and replace it with inferior retirement gratuity language.

“We’ve negotiated this important benefit into our contract, and taking it away would negatively impact about 142 of our members immediately. Everyone else who retires from now on after at least 14 years of service will be affected by this cut too,” said Stevenson. “The school division is also pushing a wage offer well below increases to the cost of living.

Get updates from CUPE

There are no upcoming events.